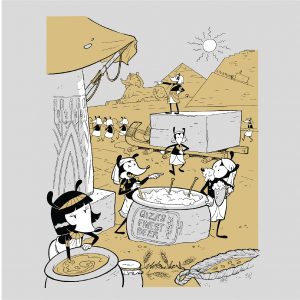 Petros Christoulias: ″This series of illustrations follows important points in beer history that goes deep into the history of mankind. The mouse characters are used as a clear reference to the first 2d animation films because this gives an oldschool feeling that suits the “back in time“ concept and also prepare the ground for funny comments″
Petros Christoulias was born in Chalkida, Greece, in 1979. He graduated from the  Fine-Arts School of the Aristotle University of Thessaloniki in 2005 and he works as an illustrator and comic creator ever since. His comics have been published in several Greek magazines and websites. He has also illustrated children’s books and  worked as concept artist in animation projects

Back  to Our Artists